Q: Where did Superman, Batman and Spiderman go to on Teacher’s day?

Well, there’s no doubt as to credibility of this sentence, mainly because everyone who is someone has heard of Rajnikanth and his “Superpowers”. So it shouldn’t come as a surprise when desimartini.com, a portal for Bollywood news, released a microsite in a bid to honour Rajnikanth’s 61st birthday, that can be opened only when it is NOT connected to the internet!

Yup. You heard me right. Fans can view different interesting stuffs about the larger-than-life figure on this site and they needn’t even be connected to the internet. When you go to the link of the site, it welcomes you with a note asking you to switch off your net connection to enter the website. 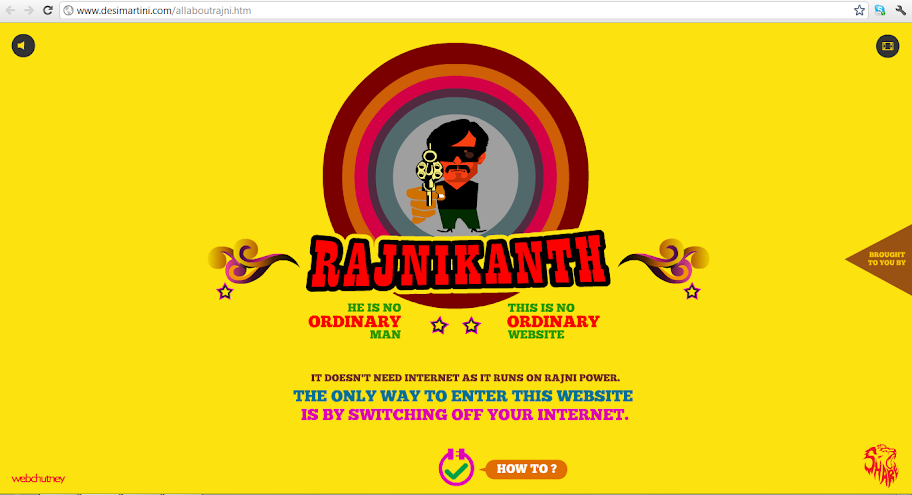 After that is done, you are congratulated for your actions that have earned yourself the “right” to enter the website!

Now that sounds so Rajnikanth!

The inner page is divided into three sections- The Man, The Star and The Legend, each bringing about different trivia, facts and jokes about the Style Mannan. 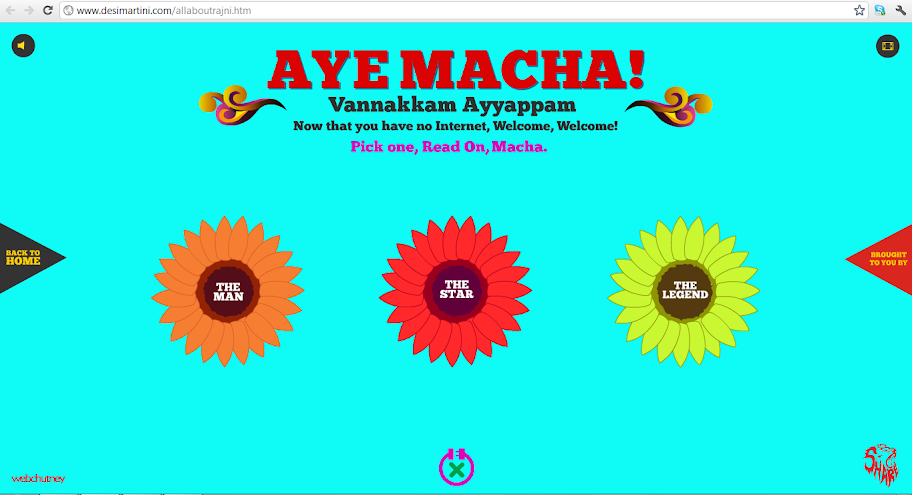 And Rajni power doesn’t end there. The site literally runs on “Rajni Power”, as is shown by the following screenshot taken when the page loads. Now that’s what I call “Rock n Load”!

In the meantime, if you plan to cheat the site by connecting to the net, up comes a Aiyyo message, requesting you to switch of your net to continue browsing.

The concept of the site is based on a complex algorithm running in the back-end that keeps an eye on the propagation of data/information packets between two terminals. ‘Magic’ kicks in soon as the broadband speed is down to zero, which is the basic premise on which the concept has been constructed.

Rocket scientists may say its just a flash based site which cache’s all the content on initial download of the site and then plays from the local browser. But well, for a layman its still Uber Cool. And anyways it’s the idea that matters. At times it’s the simplest ideas that make the maximum impact!

Gurbaksh Singh, creative director, Webchutney, says, “Desimartini came to us with a clear mandate to do something extraordinary to increase outreach and visibility. Initially, we followed protocol and began exploring ideas in the social, mobile and digital space including augmented reality, but soon realised that nothing competed with the might of Rajini’s on-screen and real-life persona. It had to be a simple concept that will baffle users to the point of disbelief, and then a miracle will occur to induce gasps of ‘OMG!’, in keeping with Rajini’s original signature style. We knew we were on to something big as soon as we cracked the idea to create a website that will run purely on ‘Rajini Power’. (as on AFaqs)

When it comes to Rajni, nobody questions the technicalities. And last time I heard, Larry Page and Mark Zuckerberg were at Rajni’s doorstep, pleading to save their websites from doom!