This Onam, decided to give Maveli a different look and feel. A character which would reflect the present day “freak” dressing we see around a lot. If Maveli was to be around now, keeping up with the modern times, am sure he would look something like this.

An illustration of Maveli done as a hobby work.

Did this caricature as a Special Wedding Gift for two of my most favourite people in the World – Rohit and Aswini.

Since am not too good with drawing faces, took me around 4 hours to get the faces alone. Rest was easier after that. Outlines of the caricature done in Illustrator and rest all colouring and shading in Photoshop. Partnered up with my Wacom Tablet after long. Hence decided to learn something new. Therefore, went with learning the nuances of drawing and texturing hair. Since Hercules movie is doing good, decided to do a minimal illustration poster on Dwayne Johnson’s character from the movie. 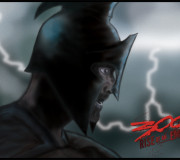 After watching the movie 300 rise of an Empire, I was thoroughly impressed by the intensity of the character Themistocles in it. And also, since it had been quite a long time since I drew anything, gave it a shot.

In the learning stages, so yes there’s a lack of perfection. But for a change, rather than using the “Dodge and Burn” tool, used the right colours to better understand the colour mix. The letters “300” above, got from the web, whereas “Rise of an Empire” has been written using League Gothic Font.

About 6 hours of sitting and drawn with my Wacom Bamboo One CTE 460 Tablet. 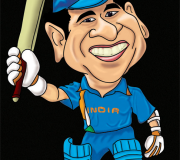 The whole of India and Social Media had been abuzz with the news of Sachin Tendulkar’s retirement. Hence, as a tribute to him, thought of doing this caricature for the Master Blaster.

Close to 7 hours of work. Drew the outlines in Adobe Illustrator and the colouring in Adobe Photoshop, since am more accustomed to the latter. Wanted to use colours for the shading areas, but instead, the lazy me went ahead with using the Dodge and Burn Tool. Shoot me!